3 Trap-Bar Exercises To Help You With Painful Movements

If you had to condense the ideals of strength training into just three bullet points, what would they be? You could say “big bench, big squat, big dead,” but I prefer to think a little more big picture, like this;

To live up to all three points, you need a flexible approach. Staying maniacally attached to a single implement like the barbell may help you live up to the first and second, but the third one catches far too many lifters.

If you’re tired of being beat up by the bar, it’s time to consider its oddly shaped half-sibling, the trap bar or hex bar. Some of the most commonly butchered and painful barbell lifts can be swapped out for trap-bar variations to yield a serious training effect, minus the chronic aches and pains. 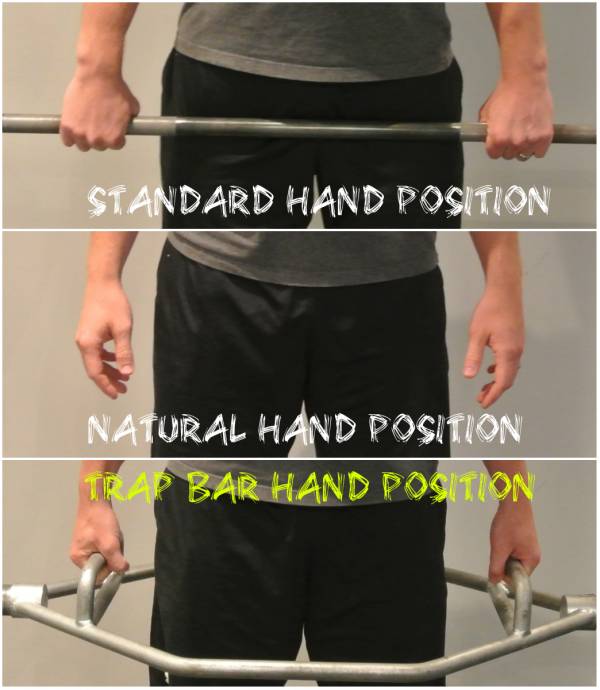 The deadlift is clearly the most polarizing trap-bar-based exercise. To some, it seems like a lesser version of the barbell variation. To others, it’s not even a deadlift, but is more of a squat. This confusion leads plenty of people to ignore it, which is a shame, because it’s a great movement that could help plenty of lifters go heavy without feeling run over.

What’s so different about trap-bar deads? Simply put, by stepping inside the trap bar and grabbing hold of the middle of the handles with a neutral grip, you can perfectly align the load on the bar with your body’s center of mass.

The traditional deadlift, on the other hand, starts from an anterior-loaded position in which the bar is positioned in front of your body. This challenges muscles like the glutes and hamstrings more directly, making it a great way to develop strength. However, the barbell variation is also more dependent on a well-functioning posterior chain and core stability. This can make it difficult and dangerous for lifters training around injuries or with a history of chronic lower-back pain. 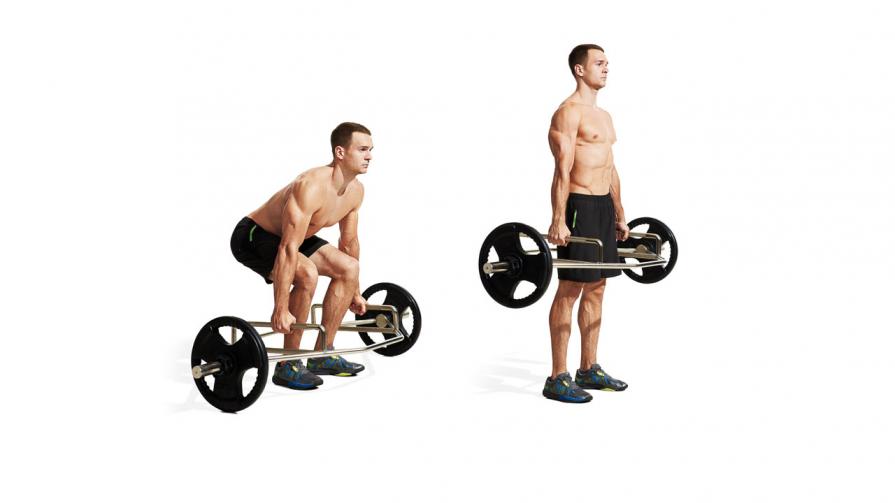 The trap bar enables you to place the load in a more centered position over your base of support, making workouts more tolerable for lifters who are either banged up or can’t afford to be. That’s why it’s an increasingly popular training choice for sports-performance and athletic-development programs.

For the rest of us, the trap-bar deadlift can be a great way to add variation to your deadlift programming. It can be loaded and programmed essentially the same as the traditional barbell deadlift. Cycle it in during a deloading phase, or just to add a new muscle stimulus to your training.

Because the trap bar is so easy and natural to step into, many people forget about all of the pressing variations that can be executed with it.

The traditional barbell bench press, for example, can be notoriously tough on your anterior shoulder joints. As such, it’s sometimes hard to add quality training volume and intensity to this staple movement over the course of a training week. But the trap bar’s shape, size, and handle arrangement makes it possible for you to open up your programming to more pain-free pressing volume.

Instead of requiring a double-pronated grip on the barbell, the trap bar’s handles are aligned in parallel, allowing a neutral grip for pressing-based movements. This position is more shoulder-friendly, reducing the internally rotated glenohumeral position that sometimes lead to impingement. It also reduces the carrying angle, or angle between your upper arm and side of your torso, which places your true shoulder joint into a more “centrated” and natural position. 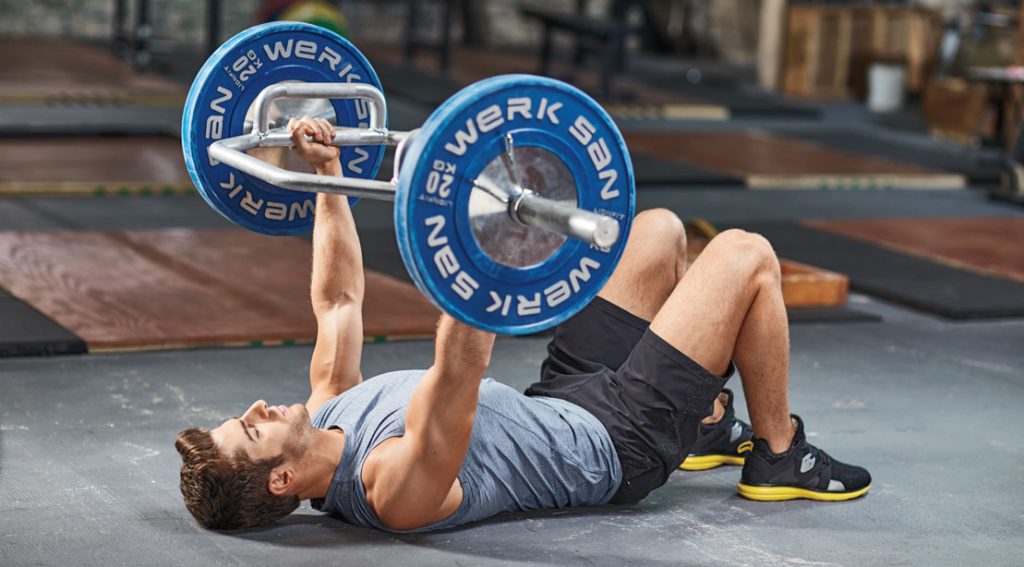 Perhaps my favorite pain-free pressing variation is the trap-bar floor press, which also limits the range of motion of the pressing movement, further reducing the overall joint stress of the movement. The limiting factor to the range of motion will be your upper arms making contact with the floor.

I recommend setting up in a rack rather than on the open floor. This will ensure that the bar stays in a parallel position, so you don’t hit yourself in the face.

You’ll be able to load this movement heavily, so don’t feel you need to treat it like a light accessory move. Try it if you’ve been on the shelf, and prepare to be surprised.

There may not be a more notoriously tough movement on the lower back than the traditional barbell bent-over row. It starts with the same anteriorly placed load as the deadlift, but gets even more iffy by demanding the lifter to maintain a proper isometric hold of the hip-hinge position throughout the set.

For many lifters, getting into a pristine hip hinge with body weight is tough enough. Add the dynamic rowing component, and this lift becomes just another way to round the back and put undue stress through the lumbar spine and posterior pelvis—while actually minimizing the intended training effect. 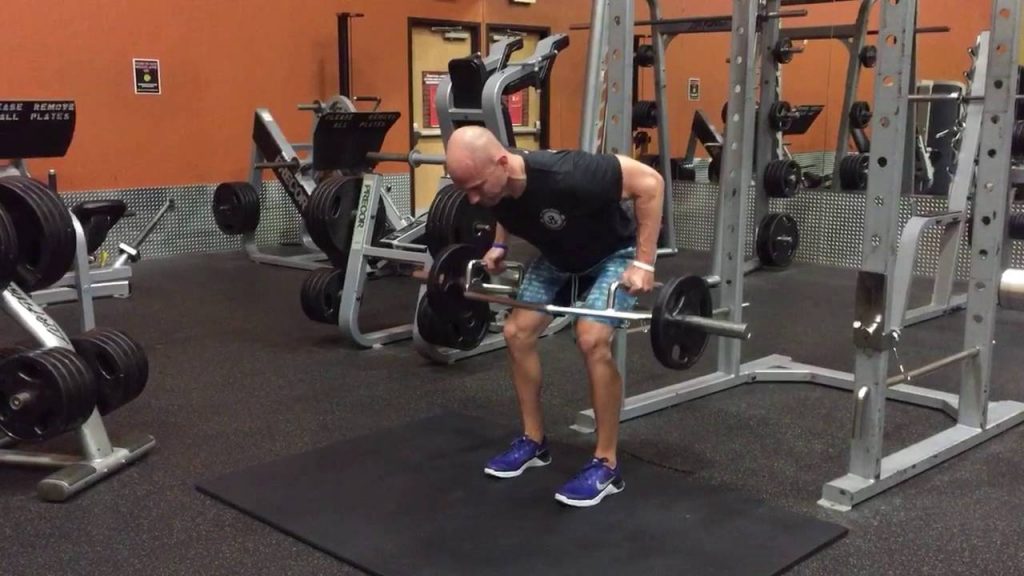 That’s a lose-lose situation if I’ve ever seen one. In fact, I’ve almost entirely stopped programming barbell bent-over rows into my athletes’ programs. On the other hand, a strong isometric core position with both hip and back integration is a hell of a combo, so it would be silly to just throw away the bent-over row movement pattern altogether.

Once again, the trap bar comes to the rescue, offering a variation that lifters can not only tolerate, but execute with clean and crisp form.

It starts the same as a deadlift: Step inside, and lift it off the floor. Slowly hinge forward at the hips, driving your butt behind you to achieve a bent-over position with full core tension and engagement of the glutes and hamstrings. In this position, the trap bar places the load over your center of mass and enables you to simply execute the row without excess shear stress on your lower back.

To change the angle of pull using the trap bar, simply hinge over more or less at the hips. Varying angles like this is a great way to keep your training new and novel. But for starters, achieve your most stable core position and work from there!