You don’t need to worry about counting calories. If you eat from the list of nutrient dense foods (which includes bacon), you can eat as much as you want, as often as you want.

Eating nutrient poor foods leads to hunger withdrawals and even withdrawal symptoms when you try to clean up your diet. Withdrawal hunger is a condition where the body lies to the brain and tells you it’s time to eat when it isn’t.

The list of nutrient dense foods contains a large number of surprises, including nutritional powerhouses like liver. Did you know fruits are relatively low in nutrient density?

By using the foods on the nutrient density list, you can mix nutritionally appropriate foods that allow you to control hunger, become healthier and lose body fat.

Lost weight effectively and consistently by counting calories? If you were too then you would have to weigh all your food and take into consideration your age, activity level, weight and percentage of muscle!

It’d be worthless unless you were able to figure out a way to assess how much brown fat you had and whether the communities of mitochondria in it and your muscles were youthful or old.

If you want to lose fat, eat as much as you want, whenever you want, as long as your diet is based on a balanced selection of specific foods.

Nutrient dense foods have a high ratio of vitamins, minerals, enzymes, anti-oxidants, etc., relative to the total calorie count of the food. For instance, spinach, the first “super food,” has a lot of nutrients and very few calories.

How can you eat a balanced diet of all the nutrient dense foods you want and lose body fat at the same time? Yes, eating too much of any food can lead to fat storage, but it’s harder to overeat protein or nutrient dense foods in general than the processed carbs and fat found in calorie-dense foods. In general, eating high nutrient, lower-calorie foods would have the following benefits: 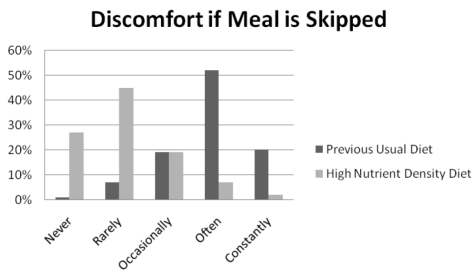 Hunger occurs when glycogen stores approach depletion. Hunger signals are sent to the brain and you feel compelled to eat. Eating prevents the process of gluconeogenesis, otherwise known as the breakdown of lean tissue for needed glucose. This process prevents the body from using up muscle tissue as an energy source.

Withdrawal hunger is when someone subsists on nutrient poor foods, hunger signals are sent to the brain much earlier in the digestive (catabolic) process before the breakdown of lean tissue is anywhere near to becoming a problem.

If people learned to eat nutrient dense foods, they wouldn’t have to get their food “fix” when it wasn’t needed. They’d eat only when they were actually hungry. Since hunger is one of the main impediments to fat loss, people on a nutrient dense diet wouldn’t experience it as much, and when they did get hungry, it’d be legitimate hunger.

A diet filled with nutrient dense foods would likely make a significant difference in the way you look, it also has health benefits. 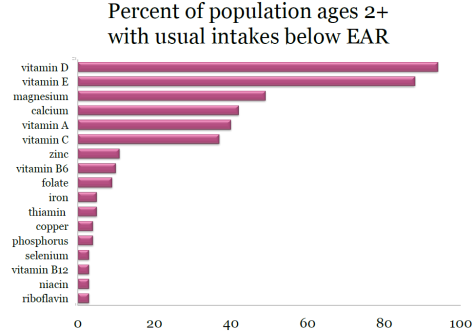 When it comes to measuring nutrient density, food scoring systems presumably help consumers figure out what’s good to eat and what’s not to eat. The trouble is, a lot of them reflect the biases of the people who came up with the system.

In addition to leaving out a number of vitamins and minerals, these lists, give short shrift to protein in general, but especially animal protein.

The Aggregate Nutrient Density Index (ANDI) system gives food a score of 1 to a 1,000 based on certain nutritional parameters. Kale, mustard greens, collard greens and watercress all get a 1,000, but meats, seafood and dairy products all rank under 50 and aren’t considered to be health-supporting.

Different systems judge the value of a food by what it doesn’t contain, like saturated fats, cholesterol or sodium, but this type of system can be problematic.The evidence strongly suggests that cholesterol and saturated fat are perhaps villains, but the creators of these lists haven’t read the nutritional crime blotter to find out that these “bad” nutrients have been exonerated.

Consider that some fat-free yogurts have one-sixth the protein of cheese, but calculated per 100 grams, the yogurt comes out way on top because the fat in the cheese conflicts the math in the yogurt’s favour.

Other systems give weight to fibre, but fibre is not an essential nutrient. One such system gives fibre equal to 16 other nutrients that include protein, calcium, iron, potassium, niacin, folate, etc. It’s the “Powerhouse Fruits and Vegetables” (PFV) classification scheme.

Unfortunately, the list only considered fruits and vegetables. Watercress came out as the most nutrient dense food. Only 7 of the 41 items on the list were fruits, with all of them ranking in the bottom half of the list. Missing off the list entirely, were raspberries, blueberries and cranberries. Three fruits that aren’t used to being dissed in such a manner.

Here’s a sampling of some of the superstars on their list:

While the list is limited because it only addresses fruits and vegetables, sampling the weirder and often more distasteful members of the top 20 vegetables on the list, is good nutrition. 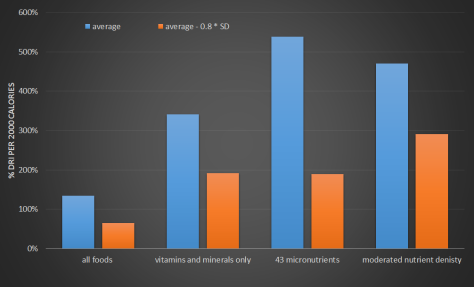 Harvard nutritionist Mat Lalonde looked at all the definitions of nutrient density and found the same problems, so he decided to compile his own list. He essentially took nutrients per serving and divided it by weight per serving so that foods could be on a relative equal footing when measured against each other.

He then defined “essential” by listing those things that were truly important to human health. The list included essential fatty acids, essential amino acids and crucial vitamins and minerals.

And it’s not much different for liver (or organ meats in general) when you look at nutrients like phosphorus, magnesium, potassium, zinc, iron, copper, vitamins A, D, and E and thiamin, riboflavin, pantothenic acid, folic acid, or practically any of the nutrients on Lalonde’s list.

Liver, as well as other organ meats, are the most nutritionally complete foods in existence.

Herbs and spices compete with organ meats on LaLonde’s list. If you used spices often and as liberally as your taste buds allowed, you could upgrade your nutritional status considerably in the long term.

Here are the approximate nutrient density values derived by Lalonde. The minus values means that the foods may be high in certain nutrients but are lacking or completely deficient in others. 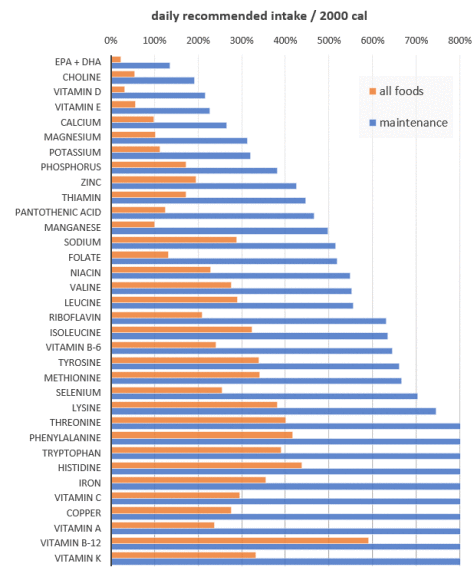 How Do We Use This Information?

Let’s say you were having some turkey breast. It’s an excellent protein source, but it’s nowhere near liver in nutritional might, so you will augment your turkey meal with some raw, green vegetables to get the equivalent amount of nutrients.

Or let’s say you are cooking up some black beans. They’ve got some nutrients and some amino acids, but not all of them. So you could make a meal of cooked beans with bacon, which is rich in protein. You might also throw in some herbs to compliment the taste and nutritional profile of the dish.

You probably knew that vegetables and fruits, seafood and clean meats are good for you, while store bought pastries probably aren’t.

However, it does a body good to start thinking about how foods can compliment each other and a balanced diet is truly an intricate blend of a variety of food groups.

Eating a balanced diet of foods that are nutritionally dense, we accomplish the following: